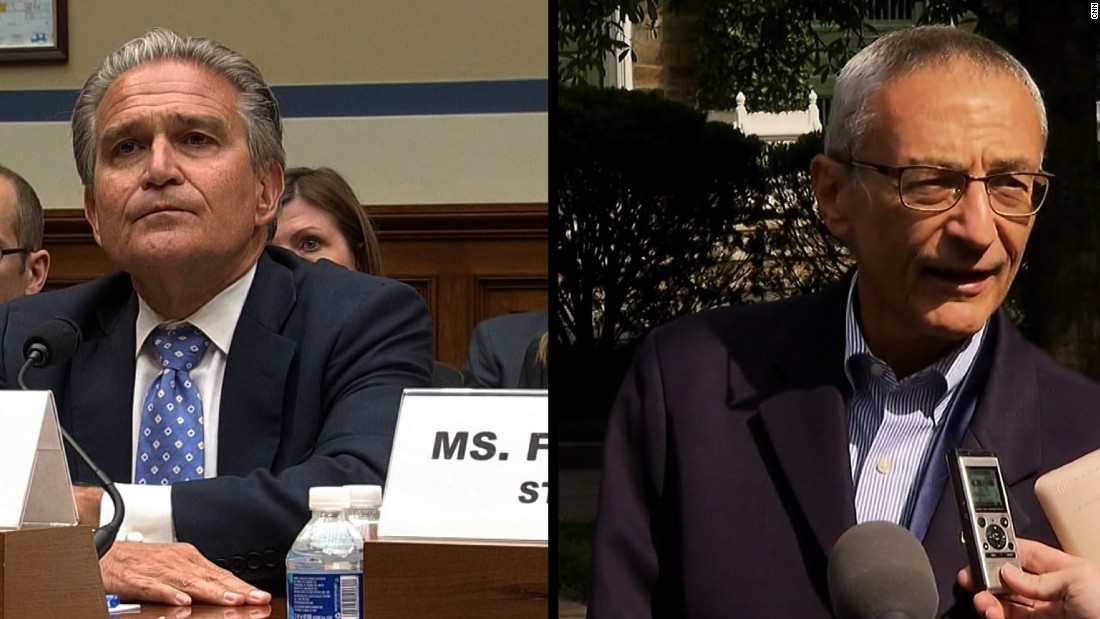 Washington (CNN)An email released by WikiLeaks on Wednesday appears to show a senior Justice Department official sending information about the State Department’s review of Hillary Clinton’s emails to her presidential campaign — a move that comes as the Justice Department is under increased scrutiny for its handling of the email investigation.

Assistant Attorney General for Legislative Affairs Peter Kadzik, who essentially serves as the Justice Department’s lobbyist to Congress, sent the email in question to Clinton campaign chairman John Podesta from a private Gmail account on May 19 last year with the subject line, “Heads up.”
“There is a (House Judiciary Committee) oversight hearing today where the head of our Civil Division will testify,” he wrote. “Likely to get questions on State Department emails.”
“Another filing in the (Freedom of Information Act) case went in last night or will go in this am that indicates it will be awhile (2016) before the State Department posts the emails,” he added.
Tim Kaine: James Comey’s actions are ‘making our folks mad’
The exchange is one of tens of thousands of emails stolen from Podesta’s Gmail account and published by WikiLeaks in recent weeks. CNN cannot independently verify the authenticity of any of the emails, and the Clinton campaign has so far declined to verify individual emails.
The Department of Justice declined to respond to questions regarding the email, and Clinton campaign spokeswoman Jennifer Palmieri, who was among the officials to whom Podesta forwarded the email in 2015, also declined to comment when asked by a reporter aboard Clinton’s campaign plane.
The email plays into Republican candidate Donald Trump’s long-running narrative that Clinton and her entourage belong to a corrupt political elite seeking to exert influence at the Justice Department. Over the summer, days before the FBI announced it had completed its investigation into the private server, Bill Clinton met with Attorney General Loretta Lynch aboard her government plane, sparking accusations of a conflict of interest.
Trump was quick to raise the Kadzik email during a campaign rally in Florida Wednesday afternoon, calling Kadzik “a close associate of John Podesta.”
“These are the people that want to run our country, folks,” Trump said to a chorus of boos. “The spread of political agendas into Justice Department — there’s never been a thing like this that has happened in our country’s history — is one of the saddest things that has happened to our country.”
The legal filing referenced in the second part of Kadzik’s email had been submitted to the court a day before Kadzik sent it, and had already been reported on in the media. But Kadzik’s phrasing, and his decision to write from his personal email account, gives the impression he was passing the information along as an informal tip, not knowing whether it had been filed.
Read more: Turmoil in the FBI
Information about the congressional hearing was also publicly available.
Podesta later forwarded Kadzik’s note to Clinton’s other senior campaign staff with the comment, “Additional chances for mischief,” though it wasn’t clear to whom or what he was referring.
The conversation suggests Kadzik may have felt inclined to keep Podesta informed about developments at the Department of Justice that related to the fledgling campaign. The FOIA case in question involved the State Department, not the campaign, and Podesta was not directly involved in the legal proceedings.
Kadzik previously worked for Podesta as a lawyer, and additional emails released by WikiLeaks suggest the two men were friends.
For example, in January, Kadzik and his wife emailed to wish Podesta a happy birthday and invite him to dinner next time he was in town.
Kadzik’s wife, Amy Weiss, worked in the White House in the late 1990s when Podesta was then-President Bill Clinton’s chief of staff.
It’s unclear how Kadzik learned of the FOIA filing, which was submitted by Department of Justice attorneys representing the State Department in ongoing lawsuits.
Despite Trump’s assertions to the contrary, Kadzik was not directly involved in the FBI’s investigation into Clinton’s private email server, nor is he involved in its current review of emails found on a computer belonging to the estranged husband of top Clinton aide Huma Abedin.
The stolen email is one of several published by WikiLeaks in recent weeks that raise questions about the coziness between the Clinton campaign and government officials.
Last month, the group published an email in which Brian Fallon — a former spokesman for the Department of Justice now working for the Clinton campaign — indicated he has spoken with “DOJ folks” about pending FOIA litigation.
And on Wednesday, an email emerged showing communication between a State Department spokeswoman and top Clinton aides about how the State Department would respond to reports about the former Secretary’s emails. This particular exchange was from March 1, 2015 — one day before Clinton’s private server was first revealed by The New York Times, and about a month before the official launch of her presidential campaign.
The spokeswoman outlined the State Department’s response to the upcoming report, indicating that the press office had incorporated input from the Clinton aides.
The email was forwarded to Palmieri, who in turn forwarded it to Podesta.
“You may have already heard from other channels, but NYT will have a story tomorrow on HRC’s Benghazi emails,” Palmieri wrote, along with speculation about how the reporter learned of the server.
“Better now than April,” she added.

You've Been Trumped Too review this is what a Trump win would look like
Time to get a smartwatch? Apple Watch Nike+ review
New York Times review pans series but then admits critic saw it in wrong order