The hacks are cynical, the laughs regular, the Hecht and MacArthur play a familiar joy. But it is Lanes entrance as Walter Burns that really stops the press 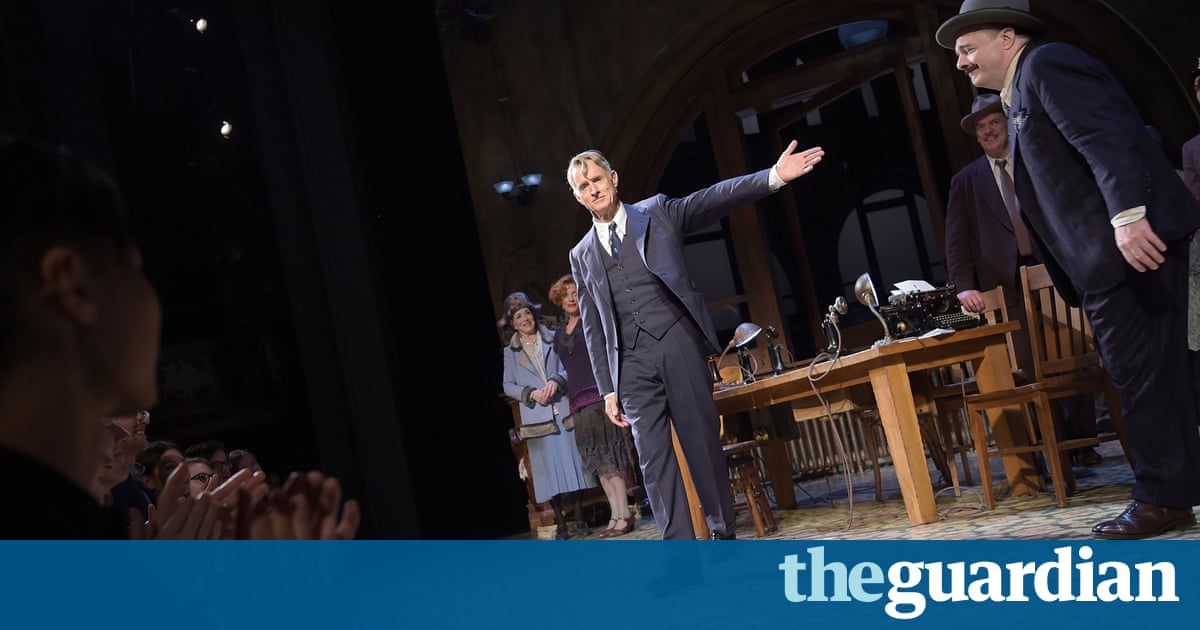 If ever an actor was the theatrical equivalent of a banner headline, that actor is Nathan Lane. Lane, who plays the bellowing editor Walter Burns, arrives a little more than halfway through the revival of The Front Page at the Broadhurst Theatre, splashed across the stage like a 72-point font. His jubilant, giant performance injects a cantankerous vitality into Jack OBriens otherwise pleasant and respectful revival.

The talky, gleefully squawky 1928 play by Ben Hecht and Charles MacArthur is a comedy as black as shoe polish. It is also a passionate op-ed on the romance of the bygone newspaper industry.

The action is set in a press room at the criminal courts building on the eve of the hanging of a cop killer, Earl Williams (John Magaro). The forthcoming execution doesnt especially trouble the old hands who have gathered here to drink, jaw, play a hand of poker, and call in the occasional story. Their only complaint is the timing of the hanging. Why cant they jerk these guys at a reasonable hour so we can get some sleep? one gripes.

The plot coagulates when Williams escapes from custody, just as the longtime reporter Hildy Johnson (a dapper, oddly wan John Slattery) announces his retirement from the city pages in favor of marriage to Peggy (Halley Feiffer) and a cushy job in advertising. (As Slattery only recently finished his run on Mad Men, that line gets a particular laugh.)

Journalists, Hildy complains, peeking through keyholes. Running after fire engines like a lot of coach dogs. Waking people up in the middle of the night to ask them what they think of companionate marriage a lot of lousy, daffy buttinskis, swelling around with holes in their pants, borrowing nickels from office boys! And for what?

The business, of course, wont let him go so easily, especially when a scoop beckons.

The set is handsome, the dialogue sharp-witted, the cast an assemblage of some of New Yorks finest character actors (Jefferson Mays, David Pittu and Dylan Baker) and big names including John Goodman. The style is vivid and almost expressionist in the way that conversations are layered over around each other. Some of the discussion of race and gender is fairly unreconstructed, but OBrien has excised the nastiest words.

Yet the revivals energy is something less than crackling and the enterprise might have seemed merely respectable were it not for the joyously disreputable Lane. Dressed in a homburg hat and a chalk-stripe suit, with a moustache that looks like a chipmunk has attached itself to his upper lip, he gives a performance that is both outsized and just the right size.

A man seemingly devoid of ethics (he wont let a little thing like kidnapping or arson stand in the way of a good story), his Burns is outrageous, disgraceful and yet impossible not to adore. He represents the best and worst of journalism, the selfish and single-minded pursuit of the truth (and advertising dollars).

Print media may be imperiled, but one has the sense that were Lanes Burns in charge, hed shout it right back into shape.